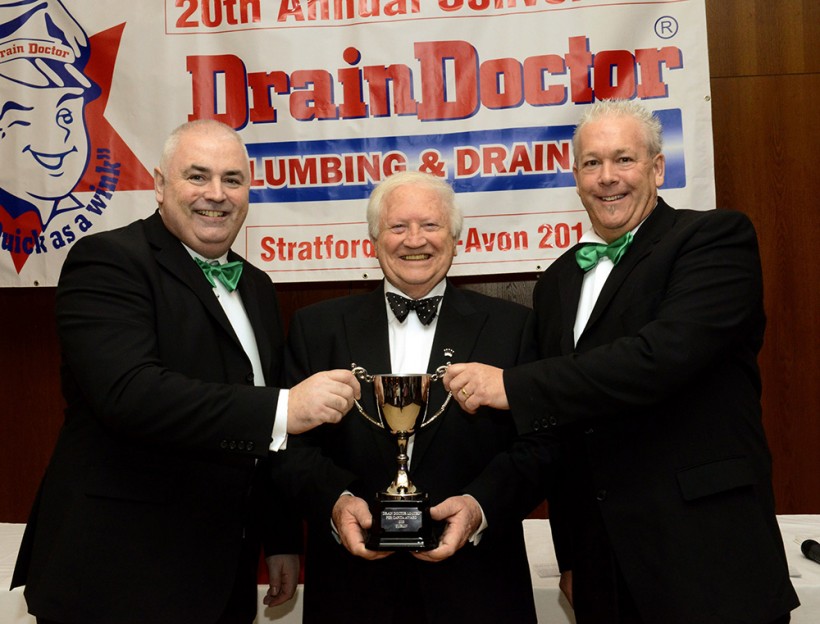 The Dublin franchise business of Drain Doctor Plumbing, which covers the city and surrounding areas, has crowned another successful year by being presented with an award for achieving a high ‘per capita’ turnover.

The award is given to franchisees which have generated outstanding turnover related to the population of the area they serve.

Group founder and chairman Freddie Mitman presented franchisees Paul Griffin and John Dempsey with their trophy at a gala awards night at the Holiday Inn Hotel in the historic English Midlands town of Stratford-upon-Avon.

Paul Griffin said: “We were delighted to receive our award this year. We try on a daily basis to grow the Drain Doctor name, brand and service and as a company we have worked hard to keep building our business – especially during the downturn which has occurred in Ireland over recent years. This award is recognition of that hard work.

“We have built up a good customer base who we feel are very loyal to us, but in saying that we work really hard to make sure we give them dazzling all round service. We have great staff who also are very loyal and we all work as a team, which is vital as the hours can be very long – it’s 24/7”

Drain Doctor Dublin has a very strong commercial customer base across Ireland which includes Dunnes Stores and Penney’s/Primark. John Dempsey said: “We have a planned preventative maintenance contract to cover all Primark stores in Ireland and we also act as consultants for some of their European stores and new builds.

“We also have contracts with EE group, Starbucks, TGI Fridays, Hard Rock Cafe and we look after all the Paddy Power shops in Ireland in addition to contracts with some hospitals and government agencies.”

Paul Griffin went on: “We aim to continue to give businesses and householders in Ireland the same ‘dazzling’ level of service in plumbing and drainage which Drain Doctor provides across the UK. Experience has taught us the importance of delivering a premium service on time every time and this has been borne out by this recognition.

“We investigated several franchise options when we decided to launch a new business and were impressed by Drain Doctor Plumbing’s professionalism. It allows us to be our own boss and introduce innovative new ideas but with all the support of an international organisation, a fact that is reflected in the winning of this award.”

Launched in the United Kingdom in 1993, Drain Doctor Plumbing quickly grew to become the country’s largest combined emergency plumbing and drain repair service. It now provides a 24 hour a day, 365 days a year service covering the UK and the Republic of Ireland, with each franchise such as the one in Dublin run as an independent business.